The instrument combines different elements of the trumpet construction through the history. Three microtonal keys are placed on the main bell of the instrument. Furthermore the main tuning slide can be used as a “trombone” slide and can perform a glissando through an additional mechanism. A second bell enables the rapid change of timbre as well as the production of two sounds simultaneously. The documentation of the experiment with frequency analysis is recorded in the master thesis: “The development and analysis of a Microtone-Duplex trumpet: An experiment towards extending the tonal and timbre possibilities of the trumpet”.

Often the instrument is extended with a third bell, as well as with extra tubes which connect the valves with wind-reacting objects. This acoustic set-up increases the number of new timbres and the mixing possibilities among them impressively.

Likewise is the MD performed with electronics in settings that allow electroacoustic results. The position of the microphone inside the main bell let’s the sounds who come out from the other sources (bells/objects) stay mainly acoustic. Additionally, the use of the keys on the main bell allows the manipulation of feedback loops, which leads to a counterpoint between acoustic and electronic sounds, allowing the microtone-duplex to be used as a polyphonic instrument.

Working with electronics includes a focus on making music with feedback loops. The MD in this case functions as an analogue controller of a synthesizer. The opening-closing of any of the 9 holes of the instrument (as well as combinations among them, and all in relation to the distance from the amplifier) allows the manipulation of the feedback loops and leads to pieces of open tone-scapes.

Last but not least, the MD is a field of exploration of traditional music. Being inspired by the traditional japanese music for shakuhachi led me focus on developing similar timbre and microtonal variations in the trumpet. This practice brought about the arrangement of the “Nesting of cranes“, one of the most remarkable traditional compositions for shakuhachi. In this case the instrument is used without the second bell, but rather with alternations between the pipe -where normally the second bell connects- and the main bell.

The Microtone – Duplex wouldn’t be realized without the cordial and very generous support of the people who crowdfunded it. 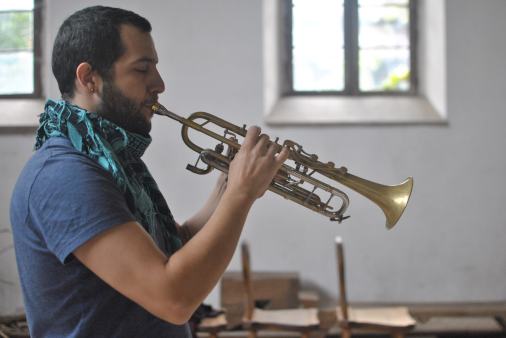 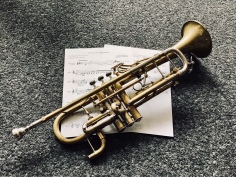 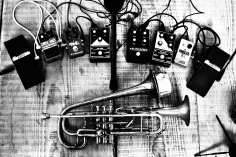 The set up of “Escape” ©Kame Photo by ©Gordon Bell
Press Enter To Begin Your Search
×